You are here: Things To Do > NCN Route 5 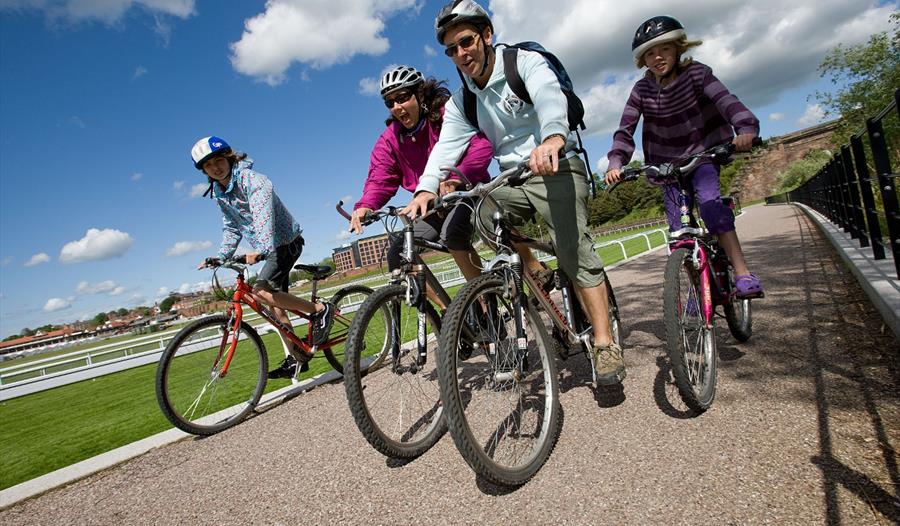 Route 5 of the National Cycle Network runs from Reading to Bangor in North Wales.

The Cheshire section starts at Kidsgrove, passing through to the national boundary near Chester. En route it runs through Alsager, Sandbach, Middlewich, Winsford, Northwich, Frodsham, Helsby and Chester.

Besides all of the larger towns you will also enjoy canals, The Weaver Navigation at Acton Bridge, the fascinating Frodsham Marshes and a ride right through the centre of Chester Zoo. Watch out for the animals that can be seen through the fences.

The route through Chester is along a disused railway line which will take you into Wales.

There are several sections that are traffic free, canal towpath, bridleways and a disused railway or two.

There are no really hilly sections but the Weaver Valley and the bridleway sections between Acton Bridge and Dutton Locks will require robust tyres. If you have a racing bike you will have to proceed with care on these sections as well as some of the canal towpaths.

At the Salt Line between Hassall Green and Rode Heath, you have a choice of using the disused railway or following the road route. Likewise, the Frodsham Marshes may be less attractive in the winter months.
Route 5 is common with Routes 70 and 71 along various sections.

• Always follow the cycle safety code.
• Check your bike is mechanically safe, wear a helmet and correct clothing.
• Always give way to walkers.
• Take care when merging with major/other roads and cycling in towns.

Please use Ordnance Survey map and signs. Please note that the downloadable route pack details were produced by the former Cheshire County Council.