You are here: Things To Do > Walking the Trackways 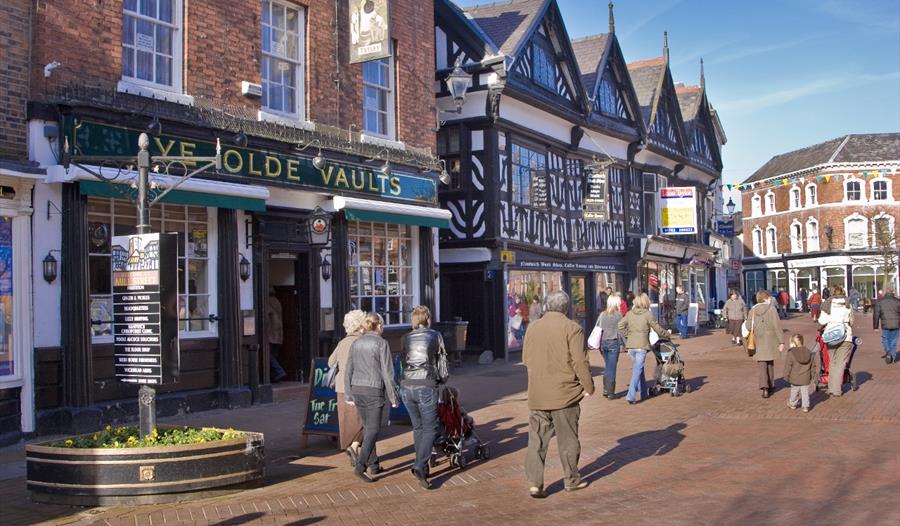 Ancient paths, Roman roads, canals and railways criss-cross the landscape, showing the strong links Crewe and Nantwich have with the development of the transport age. The route starts in the ancient village of Acton.

The Chester Road (A534) leading to Welsh Row has always been an important route into Nantwich. Welsh farmers drove their cattle along it to the market to trade for salt in medieval times. Royalist troops marched along it during the Civil War, in an unsuccessful attempt to besiege Nantwich.

The remains of a Roman road running from Middlewich to Whitchurch were excavated in the parish of Henhull in 1987. Hen Heol is Welsh for 'old street' and street is old English for Roman road. The salt industry in Cheshire was already thriving in Roman times and good roads were needed for easy transportation.

Reaseheath College was opened in 1921. From 1926, the partly black and white timbered hostel housed women from the former Worleston Dairy Institute, at nearby Aston Hall. The Dairy Institute's aim was to 'improve farmhouse cheese production' and was said to be the oldest dairy school in the country. A staggering 30.5 million kg of farmhouse cheese was made in Cheshire in 1907! Cheshire cheese production is still an important industry. The Nantwich Show, held every July, hosts the largest cheese display in Europe.

Originally Poole consisted of three manors - Barratt Poole, War-Poole and White-Poole, collectively known as 'pulles.' Notice how the manors are connected by footpaths. Many footpaths were developed in prehistoric times, as animals and people searched for food and shelter. Today there are almost 2,000 miles of public rights of way in Cheshire.

Opened in 1833, the Middlewich branch of the Shropshire Union Canal was built to link up with the Trent and Mersey Canal. Brickyard Bridge takes its name from a brick kiln works set up in 1842 in the next field. If you look carefully, you can still see where they excavated the clay.
Railways rapidly took over from the canals, due to their speed. The Grand Junction Railways Works opened in 1843 and developed into one of the greatest industrial complexes in the World! The first steam locomotive to be built there was the Columbine.

Crewe is also home to Rolls-Royce and Bentley. The Crewe factory was built in 1938 and is still one of the main employers in the area. Look out for these classy cars being test driven around the lanes of this walk! Cycling is also popular - it is said that Crewe has the highest number of cyclists for a town of its size in Britain!