You are here: What's On > An Evening with Everton Legends

An Evening with Everton Legends 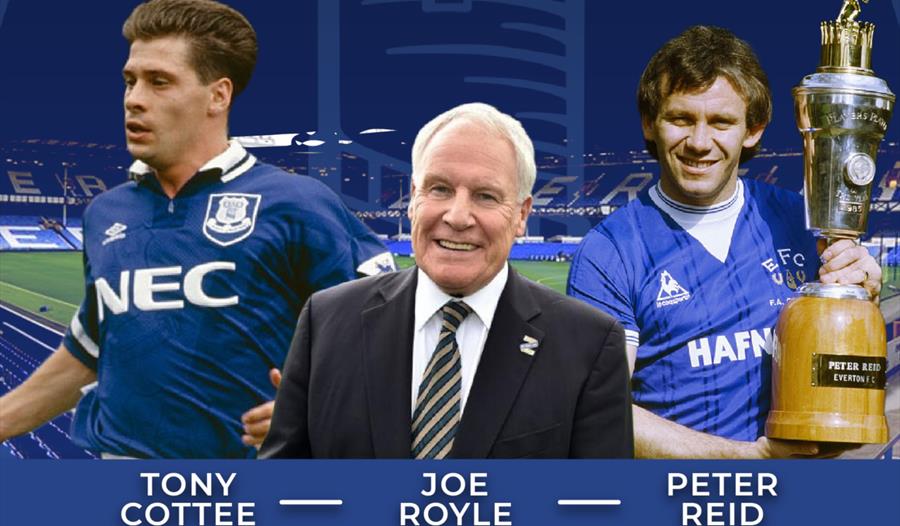 Peter Reid, Tony Cottee and Joe Royle to talk about their lives on and off the pitch

Three icons from Everton FC will be sharing their tales from on and off the pitch at an intimate event described as a must for fans.

Peter Reid, Tony Cottee and Joe Royle will all be taking to the stage at Pyramid’s Studio Theatre on Friday, 11 February, to talk about their time with The Toffees.

There will also be a chance for fans to ask questions in the second half of the evening while upgraded ticket holders can even have a signed photo taken with their heroes at a private meet and greet.

Football manager, pundit and former player Peter Reid enjoyed the most fruitful spell of his career at Everton, helping the club win domestic and European honours, including the First Division twice.

Tony Cottee played in the top flight of English football for Everton, as well as West Ham and Leicester City, and was capped seven times by England.

Joe Royle debuted for his hometown club of Everton at the age of 16, which set a record at the time, and went on to play for the England national team. He made 270 appearances for Everton, scoring 119 times.

Chris Hodgkinson, founder of HC Promotions, said: “I’m sure if you ask any Everton fan, our three legends Peter Reid, Tony Cottee and Joe Royle would easily go into the heroes category and at this night in Warrington you can hear a no holds barred, unscripted and honest view from each of them. This is a must for any Everton fan.”

An Evening with Everton Legends is at Pyramid Arts Centre on Friday, 11 February. Tickets start from £25 with ‘Gold’ and ‘VIP’ packages available for up to £75. Visit pyramid.culturewarrington.org/whats-on/an-evening-with-everton-legends