You are here: What's On > CH1 Chester Comedy Festival 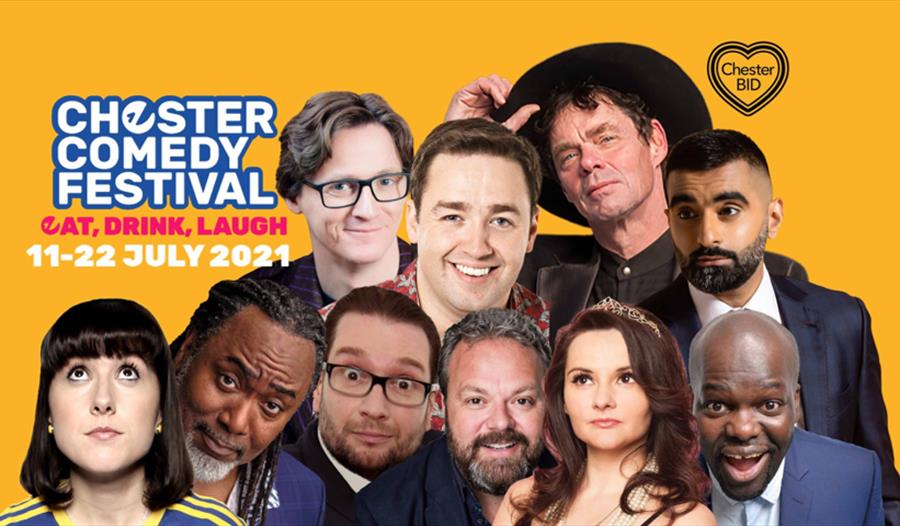 Organised by Chester BID, over 20 comedians will take to the streets and stage in some of Chester’s best venues including Chester Racecourse, Storyhouse, Opera Grill and Chester Market.

Chester Comedy Festival have lined up an afternoon of family fun with two fantastic shows from two of the best children’s entertainers in the country.

Laugh and be amazed by comedy magician John Harding, a fun filled show for all the family

"A master at what he does... funny, inventive and mesmerising" Jeff Anderson, Controller, ITV Current Affairs & Documentaries

Kids! Do you need somewhere to take your adults without them getting bored and going in a huff?

Bring them to FUNNY STUFF FOR HAPPY PEOPLE where the adults can have just as good a time as the kids.

As seen on Blue Peter and CBBC Live.

“this gentle giant has an instant rapport with children” - Adelaide Advertiser

Join Superstar comedian Jason Manford as he headlines a fantastic night of comedy featuring award winning comedian Maisie Adam as seen on Mock the Week, Have I Got News for You, QI, 8 Out of 10 Cats, Hypothetical and The Stand-Up Sketch Show. 'Go see Maisie now and have bragging rights for years to come' – HERALD

Come and enjoy a fabulous two course meal at one of Chester’s finest restaurants, the beautiful grade II listed Opera Grill, followed by a comedy show with three of the finest comedians from the international comedy circuit.

Musical comedian Christian Reilly’s first comedy gig was in the Perrier award-winning ‘Rich Hall is Otis Lee Crenshaw’. He has used his accomplished musicianship, extensive vocal range and love of music to establish himself as a global comedy circuit headliner; appearing at international festivals, on BBC radio and TV, and on the Chortle award-winning ‘Richard Herring: As It Occurs to Me’.

“If you’re a fan of Bill Bailey or Rich Hall, you’re a Christian Reilly fan already”- The Guardian

Jojo Sutherland is an unstoppable comedy force. known for being able to expertly garner laughs from every subject she touches. Current holder of the prestigious Scottish Comedy Award for Best Show.

“A conversational style with humour so interwoven it seems effortless.” - Chortle

“A performer the audience could have watched all night.” - The Herald

“Worth the price of the admission alone.” - Lancashire Evening Post

Tickets can also be purchased direct from the Opera Grill ( no booking fee) call 01244343888 email opera.grill@individualrestaurants.com

Get ready to dive into a rabbit hole of the best jokes in the world - star of Live at the Apollo and sell-out sensation Gary Delaney is back! One of the most sought after joke writers in the country and longstanding Mock the Week special guest, Gary has been through the laughing glass and he’s ready to bring you a brand new show with hit after hit of the kind of one-liners only a master could craft. If you’re hunting for snark, Gary’s got it covered!

★★★★ ‘More quality jokes in one hour than most comics have in their entire careers...Quite brilliant’  Scotsman

★★★★ ‘One of Britain's grandmasters of the one-liner'’  Chortle

Chester Comedy Festival has launched its first ever national search for the next Chester New Comedian of the Year sponsored by Concept Mortgages.

Aspiring comedians from all over the country will be invited to apply to win one of eight places in the final for this coveted title. Choosing just one winner from an array of comedy talent won’t be easy.

Hosted by Brendan Riley, “A born compere” – The Guardian

The very best comedians from the UK and beyond right in the heart of Chester every Friday.
Kick off your weekend with some guaranteed big laughs at Alexander’s Live.

This show brings together some of the finest comedians off TV and the international comedy circuit.

Reginald D Hunter Have I Got News for You? QI, Live at the Apollo and two series of the BBC2’s hugely popular Reginald D Hunter’s Songs Of The South & Songs of The Border, documenting Reginald’s epic road trip through 150 years of American popular song.

Bring your own chair, cushion or blanket and join us for an afternoon of family fun at Grosvenor Shopping Centre with two of the UK’s finest entertainers - John Harding and Wacky Woody, expect balloon workshops , silly magic and lots of audience participation.

Best of the Fest Featuring Ed Byrne and Hal Cruttenden

Multi award winning comedians and stars of TV and radio Ed Byrne and Hal Cruttenden come together for one fantastic night of comedy.

As seen on Mock The Week, Live at The Apollo, Have I Got News For You

Chester has loads of brilliant pubs but how many have you been to?

Get your walking boots on and join us on a truly unique “Mirthical Mystery” walking tour featuring five top class comedians in four different venues.  Your shoes should be the only sensible thing to bring along on this night of beer and belly laughs!

Comedy in the Cloisters

This show brings two of TV’s finest comedians to one of Chester’s most iconic landmarks.

Creator and star of BBC One’s Hospital People and 8 Out Of 10 Cats Does Countdown favourite, multi award-winning comedian, Tom Binns will appear as his alter ego Hospital DJ Ivan Brackenbury

“Binns has his character absolutely nailed, and mines the comic seam ruthlessly to create top-quality entertainment with practically universal appeal.” - The Guardian

“One of the funniest performances I've seen. I was totally wowed” David Walliams

Hosted by Brendan Riley. ‘A great compère’ - The Guardian

Come and enjoy a fabulous two course meal followed by a comedy show featuring three of the finest comedians from the international comedy circuit at Chester’s newest restaurant…..

Award Winning Comedian Nina Gilligan. Described as a bolshier Mrs Merton she's not one to suffer fools lightly so watch out for a razor-sharp wit used at will.

Montana native Rich Hall, is renowned for his expertly crafted tirades, quick-fire banter with audiences and delightful musical sequences. Rich has been described as a transatlantic messenger, lampooning each country he visits with his laser-guided observations.

Rich has appeared on BBC One’s QI, Live At The Apollo and Have I Got News For You, he wrote and starred in his own reoccurring BBC Radio 4 show Rich Hall’s (US Election) Breakdown.