You are here: What's On > Middlewich Folk & Boat Festival 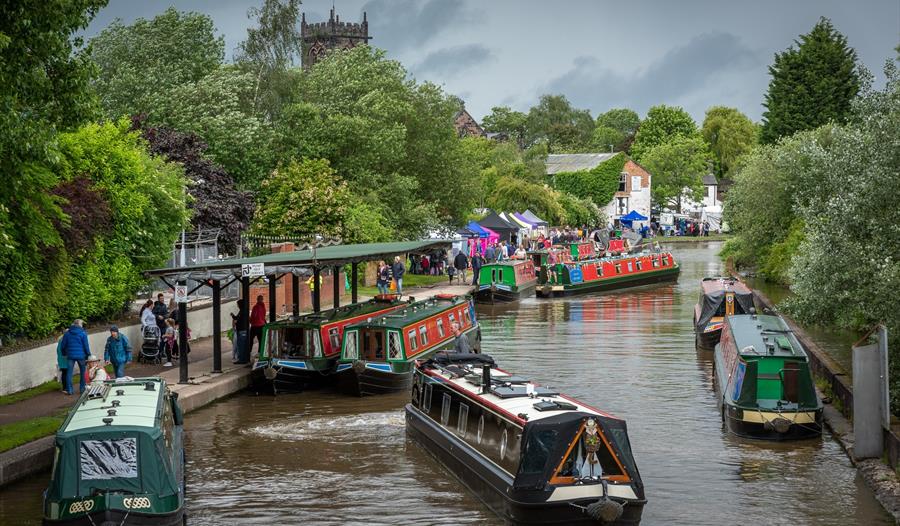 It’s back! Middlewich Folk and Boat Festival is set to make a welcome return this summer and organisers are planning to make it the ‘biggest and best’ yet.

As with so many events up and down the country, the much-loved family festival was forced to cancel over the past two years but now it’s full steam ahead with plans for a major come-back this June.

Already organisers, Middlewich Town Council, have announced a headline act, The Whole of the Moon band The Waterboys who are hugely popular on the folk/rock scene up and down the country.

A working group, including councillors, residents, and staff, is planning a jam-packed programme of family attractions and musical entertainment from June 16-19 to draw crowds and boost the town economy. More information will be shared in coming weeks.

Already there has been a joyous reaction to news of the festival’s return on social media.

The event will once again showcase Middlewich’s rich canal history with a colourful flotilla of narrowboats boats displaying their quirky names and paintwork while selling their crafts as part of a floating market.

They will be seen at three locations – on the Trent & Mersey Canal below Big Lock or above Kings Lock, and on the Shropshire Union Canal above Wardle.

The Main Stage will return to its traditional location on Market Field and there will be a toe-tapping trail of musical entertainment to follow around fringe festival pubs.

Market Field: Main stage with The Waterboys on Friday and further acts throughout the weekend

Their songs have been performed by artists as varied as Prince, The Killers and U2, all of whom have performed their classic The Whole of The Moon. The song also featured in last year's smash Netflix film Let It Snow and top HBO series The Affair.

For more information on the festival programme, its ticketed events and host of free attractions see social media or head to the website https://www.middlewichfabfestival.co.uk

Get your EARLY BIRD Tickets for the FAB FESTIVAL NOW www.middlewichfabfestival.co.uk/fab-tickets/