You are here: Things To Do > Delamere Rail Trail 6km Walking Route 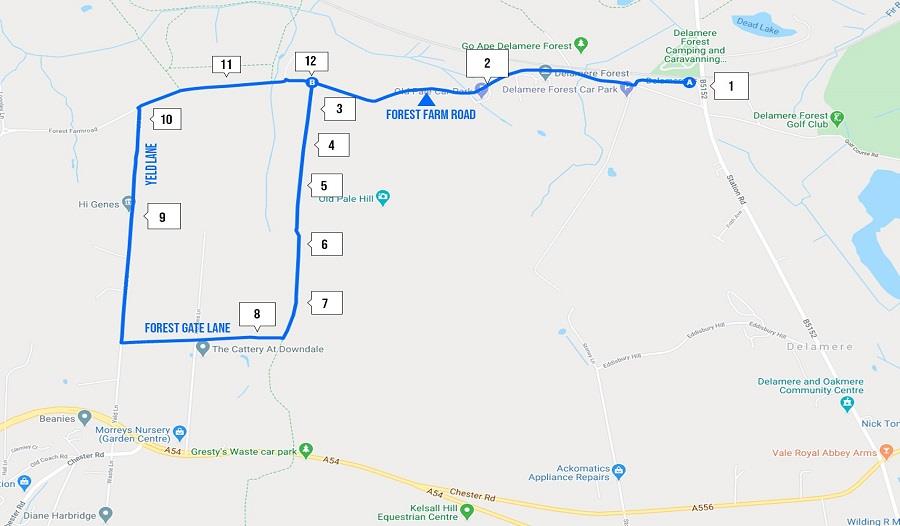 This walk is suitable for families using a robust pushchair but does include some steep up and down inclines. Footpaths and tracks are loosely surfaced.

1. From the car park by Delamere Station Café follow the track in front of the café (opposite the steps) that leads into a car park eventually passing a toilet block on your left. At the end of the car park join the footpath on the right of the exit that leads to a small area of trees alongside the railway line.

2. Where the path ends by the railway bridge carry straight along the tarmac road towards Linmere Lodge Visitor Centre car park. At Linmere Lodge Centre carry on along the pedestrian path to the right of the lane past the timber outbuildings.

3. Having passed the entrance and exit of the grassed car park area on the left look out for Old Pale Woodland wooden marker and cross the track to take the path that bears left to go up the hill.

4. The path starts to wind its way up the hill following Delamere Loop Bridleway markers towards the masts on top of Old Pale Hill. Part way up the hill when entering conifers the path forks, the left hand path is a more direct but steeper route, the right hand path is more winding but a gentler slope. Either route can be taken as they converge a little further up the hill.

5. Continue along the path with views of the Cheshire plain towards Fiddlers Ferry power station and Daresbury as it zigzags up towards Old Pale summit.

6. From the summit take the path by the Denbighshire stone heading towards the furthest two masts. Keep right to follow the path as it starts to descend towards the woods. Beware of the electric fences on the hill.

7. At the path crossroads carry straight on towards a break in the hedge. Keep following the path as it winds its way off the hill towards the woodland.

8. At the next footpath crossroads carry straight on through the woodland following signs for Yeld Lane. Eventually the path joins a lane (Forest Gate Lane), follow this lane past the houses, straight on at the lane crossroads, and up a gentle slope to a T-junction where the lane meets Yeld Lane.

9. Near the bottom of the hill on the right is Eddisbury Fruit Farm.

10. Just after the Fruit Farm where the lane turns sharp left, turn right onto the track with orchards and then the forest on the left.

11. Continue along the track past the entrance to Eddisbury Lodge, following the sign posts for Linmere Visitor Centre and the station.

12. Keep following the track past the Visitor Centre back towards the station. By the railway bridge on your left take the footpath through the woodland which eventually leads back across the car park to the station and Station Café.