You are here: Things To Do > Nelson Pit Walk 5 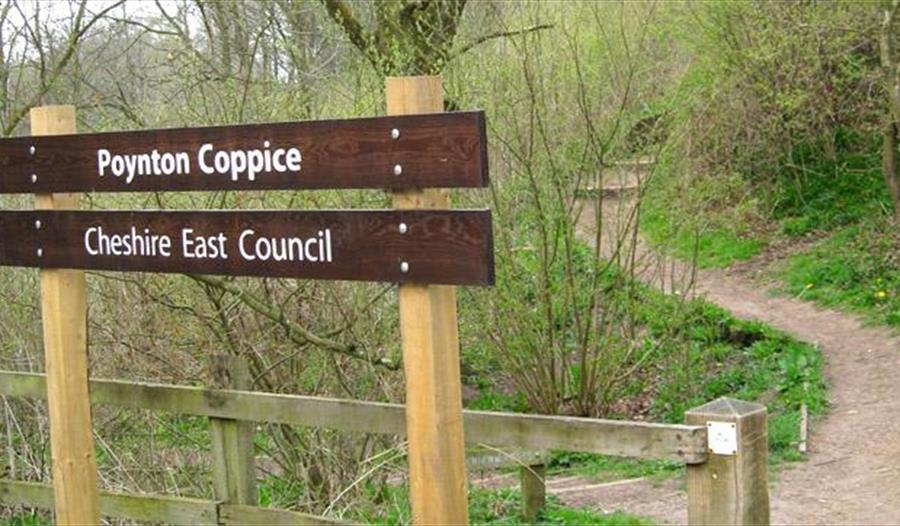 One of a series of walks from the Nelson Pit Visitor Centre. The route through Poynton Coppice is pretty at any time of the year. The majority of The Coppice is owned by Cheshire East Council and is subject to a ten-year management plan.

The route starts along part of the Middlewood Way, which is nearly 11 miles long and was originally the Macclesfield-Marple railway line that opened in 1869 and closed in 1970. After closure the area became derelict until the early 80s when it was landscaped. Dr. David Bellamy reopened it in May 1985. The majority of the Middlewood Way lies within the Borough of Cheshire East and is managed by the Ranger Service.

You are then taken through Poynton Coppice, which is classed as an ancient semi-natural wood because although it has a history of felling it has never been ploughed or used other than as woodland. In 1847, 44 acres were planted with trees by Lord Vernon to provide timber for the mines and some for sale.

Plans to bring a canal through the Coppice for carrying coal were proposed in 1795 but abandoned because of the high cost of construction. During the 1925-26 coal strike the Coppice was felled. Subsequently, alder trees were periodically coppiced to provide materials for the local clog making industry.

Many areas of woodland are called, ‘Coppice’, ‘Copse’ or ‘Copy’. Nearly all British trees will grow new shoots if they are cut down. Traditionally coppicing provided a continual supply of wood. Each winter a different area of the woodland was cut close to ground-level and allowed to regrow. Usually a few trees were left as standards to grow to maturity. After a period of about ten years, the first area was ready to be coppiced.

The route then returns to Nelson Pit. The pit’s shaft was located at the top of the mound facing the Visitor Centre. Adjacent to the shaft was an engine house and chimney. The pit engine lifted a metal cage filled with tubs of coal. At the top it was sorted into coal and ‘slack’, then tipped into horse drawn barges at Mount Vernon Wharf. The Poynton collieries had fourteen horses to pull the barges. Coal from Nelson Pit was distributed locally to Bollington and Marple cotton mills; quarries at Kerridge and silk mills in Macclesfield.