You are here: Things To Do > St Oswald's 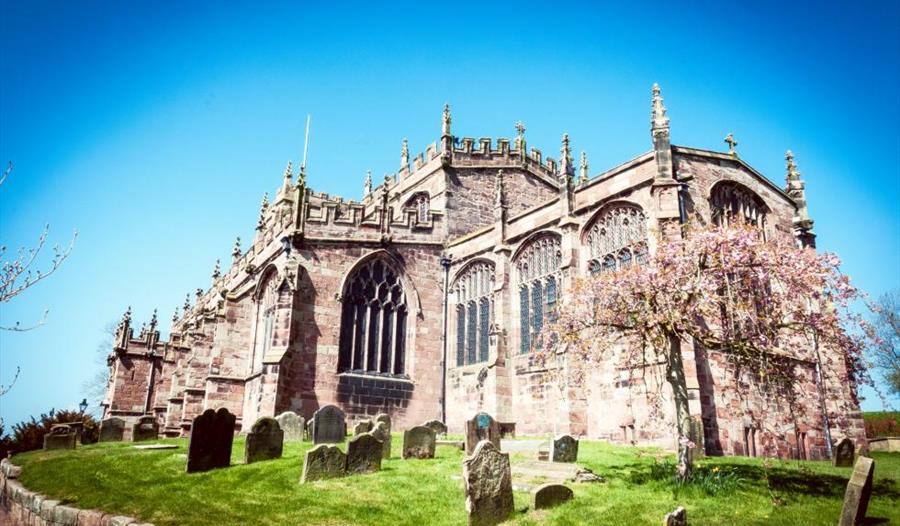 The present St Oswald's church has occupied this site for more than 600 years, replacing the wooden chapel, which formed part of the original Norman fortress, around which Malpas gradually came into being.

Thus the life of the church and the life of the village are, and always have been, completely intertwined. It is now one of the architectural gems of Cheshire and we would be delighted if you wished to look around.

The original place of worship on this site was a wooden chapel for the eleventh century motte and bailey fort, around which Malpas was formed. The only surviving part of this being the motte, or mound, adjoining the churchyard, on which the fortress keep stood.

Construction of the present nave and tower was begun in the second half of the 14th century and is believed to have been completed before 1400. However, in about 1480 it was decided to demolish the side walls of the nave down to the window sills, so that the present much larger windows could be installed. The nave was also then raised to incorporate a row of clerestory windows and the new, almost flat, roof fitted.

In the 1960s the then Rector, Canon Rylands, and his wife undertook a major renovation of the internal ceilings; during which the mediaeval carved angels and shields were cleaned, repaired and repainted. The magnificence of this restoration gives some clue to the exuberance of the original decor, in which the roof beams were painted in red and gold and the stone walls whitewashed, interspersed with various highly coloured biblical scenes. In contrast, the current interior, whilst undoubtedly moving and beautiful, is a model of civilised restraint.
Originally, as with all other churches of that period, there would have been no seating for the congregation. However, in 1680 box pews were installed which were then rented out or sold to specific users who would put their name on the pew door.

We have a full peal of eight bells, which ring to announce services, to commemorate national events, and for that best of all possible reasons: to simply to celebrate being there.

The church remains a haven of calm and spirituality and is still in daily use for its original purpose; the glory of God. A Grade I listed building, it is recognised as one of the finest medieval buildings in the county and is freely open to all. Apart from our regular services, there are frequent concerts and we receive visitors from all over the world.